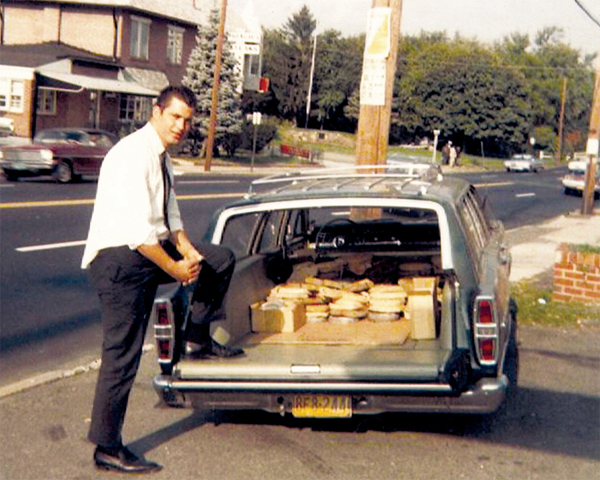 Sam Frisby was a man who loved life and had the unique gift of making you feel like an old friend even if you were meeting for the first time. He would order 3,000 pounds of Noonday onions every year to share with his much loved friends and customers. He never went anywhere without his onions and would often take them to restaurants to have with his meals. And, yes, they were the best onions you’ve ever had. “I’ve been known to tip upwards of a dollar,” Sam would jokingly say to the waitress while ordering. After the meal and if the service was good, he’d leave his trademark humongous tip, which was always much more than expected. Everything was always bigger and better with Sam. If his spending habits were questioned, he’d always reply, “It only costs 80% more to go first class.” After years of living lean, when his business began to flourish, Sam enjoyed his lifestyle at every opportunity and still managed to see that his employees and family had the best of everything that he could provide as an employer and family patriarch.

Proud to be an American, Sam enlisted in the Army at age 18 and served in the Korean War. He left the service as a Sergeant First Class and received several letters of recommendation from his commanding officers. Sam showed by example that the compressor repair business is all about service and people. He and his family faced many challenges but none like the loss of Sam’s only son, Samuel Perry Frisby II in 1989. Sam continued to move the company forward during this difficult time, thanks to his family, many close friends and devoted staff. His nephew, Joe, tells a story about the time Sam sent him to pick up a crankshaft. Joe pulled his white Ford pickup truck bed up under the unit and got out and called his uncle on the phone. “I don’t think my truck can take it, this thing is huge,” Joe told him. Sam ordered him to go ahead and put the shaft in the truck and bring it back to the shop. “Just do it, it’s a Ford… it can take it.” They lowered the crankshaft, popped the four tires and grounded the truck. “Well, I guess it was too heavy after all,” Sam commented, when he heard what happened. That was Sam for you, tenacious, fearless and passionate. It’s how he ran his business.

Sam was brilliant. As a young man, he would quickly glance through an entire newspaper and tell you 90% of what was in it. He kept records in his mind. No calculators. No computers. Sam said he learned something new every day about the compressor business which inspired him to start his own compressor repair service company, SAMCO Precision Compressor Valve Repair, in Spring Texas in 1972. At first, he worked out of his garage with his wife, Frances. Within months, they ran out of space and moved the company to a 2,500 square foot facility in Houston which grew to become a 42,500 square foot, 20.5 acre corporate hub supporting most of SAMCO’s manufacturing and inventory. Today, SAMCO’s locations also include a valve repair center in Oklahoma City and a newly expanded Tyler, Texas compressor valve repair division. Together, these divisions are set up to repair compressor valves, pistons, rods, packing cases and other compressor and engine parts. The Houston division houses a huge surplus inventory that services customers all over the world.

The expansion of SAMCO’s Tyler, Texas facility earlier this year shows the strength of leadership that Sam instilled in his family and staff who are now left to run the operations. Sam’s brother, Joel Frisby, his wife, Nancy, their son, Joe Frisby, Sam’s daughters, Denise Lovoi and Tanya Frisby, his grandson, Samuel Ryan Colditz, and the rest of the SAMCO family are moving forward and continuing to grow SAMCO Enterprises with the same passion for customer service and guiding principles that Sam and his wife, Frances, started the company with almost 40 years ago. Walking out of Sam’s funeral, you saw a parking lot filled with white Ford pickup trucks. “You can have any vehicle you want with whatever you want on it,” Sam would tell his salesmen, “As long as it’s a Ford pickup and white, I don’t care what you get.” Sam Frisby. There will be no one else like him.